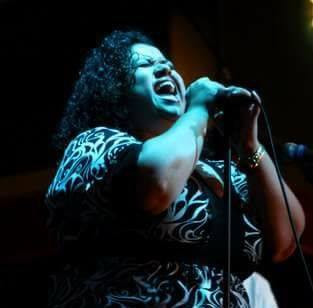 Janet Nightingale started off Loud on 7th Festival’s Soul on Fire event with big girl swagg singing “Fight the Good Fight” and “Comfortable”. She reveals that “Fight the Good Fight” has a special place in her heart as her producer faced Stage 3 Colon Cancer, and later told her that he listened to this song every day to help him get through his long battle in and out of the hospital. In lieu of this, Janet Nightingale, emphasizes the message she is working to relay in her music, “Tomorrow is not promised, and everyday is a gift and a blessing, so live life to the fullest and give God thanks”.

Ms. Nightingale has been performing since childhood, with her mother singing in Mexico with Janet in her belly from the very beginning. Janet Nightingale is a project specialist for a medical record retrieval company by day, but performs weekly on her show Pair of Queens at Gran Agave restaurant from 6-9pm , with her mother singing traditional Mexican music in Spanish with Janet entailed to sing her own cover songs . She is always working on her craft, having performed at Carnegie Hall in NY, Minnesota State Theatre and Twin stadiums. Janet is working on her own self titled album to be released by early 2022. In the meantime, go ahead and add some zest to your day, and check out her music on Spotify, Apple Music, and Youtube, following @msnightingale777.