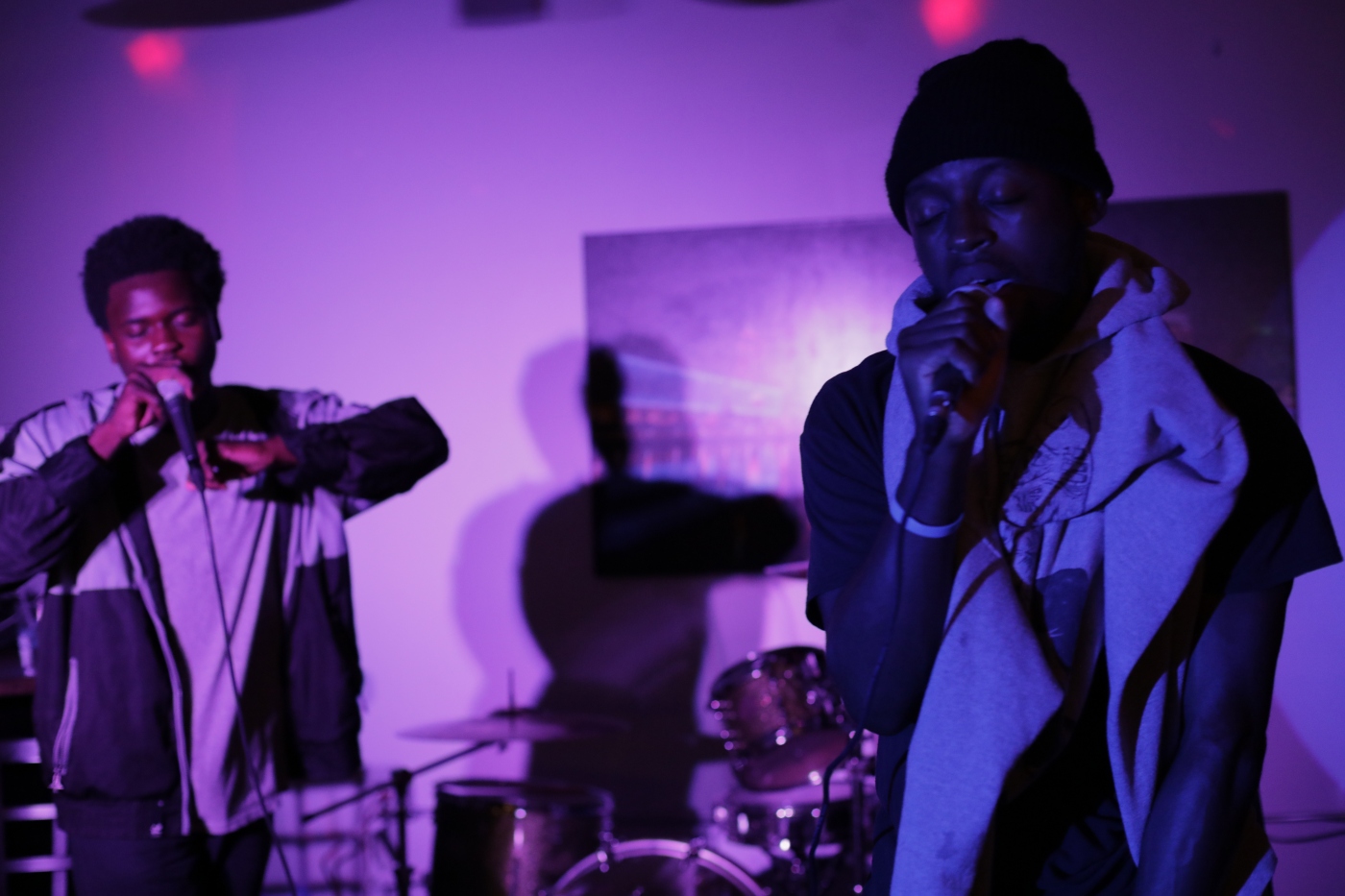 Latin— Ex.Nilo —  out of something

Tampa Bay based Dj Cotton, scouted talented Chael and Jeremiah at a Spoken Word event ‘Heard ‘Em Say’. Intrigued by their individual skills, he invited them to write a few verses for beats that he picked out for them. This bated collaboration displayed fire talent, leading to a surprisingly large, engaged reaction from the crowd at their first “group” performance.

The first couple months of collab, Ex.ni wrestled with names for their group, waiting for something to sit just right with their intent. Originally they were to be called Parmesan, due to their first song lyric, “two young brothers out here trying to get that parmesan”. Can you relate?

Jeremiah is big into philosophy, and just like many others, instead of listening in class to what was needed to pass standardized tests, he was researching on his own. He could often be found online, educating himself according to his own passions and interests, especially latin. As a result, he built a repertoire of latin vocabulary which he often uses for titles, like the song Creatio Ex Nihilo. Later to become the name of their rap duo.

Both individuals went  to Tampa Bay Technical, where every year the highschool would throw a Black History Month Show. Both had been working on developing their wordplay and ended up performing separately during their sophomore year.

Despite his perseverance to improve the quality of his writing, Jeremiah did not feel his work was up to parr and did not perform again until the annual showcase his senior year.

Everyone has a space for their creation; something that inspires them and allows their talent to flow better than anywhere else. For Jeremiah that’s his bathroom, due to it’s solidarity, comfort, and unique lighting. He looks in the mirror when he is done as his art is a reflection of him and his actual reflection is a reminder of that.

Both individuals had other dreams, Chael to be an architect, and Jeremiah a basketball player, until the artists within began to battle their way to the surface of each their focus.

Jeremiah is generally a shy person, but is completely different on stage. His raps  are captivating and alive with sound and meaning. Complimented by Chaell’s easygoing, natural demeanor,  with equally well thought out wordplay; making them the perfect team. Jeremiah was able to overcome his shy nature by realizing it wasn’t about the crowd, it was about getting lost in the music and just taking his glasses off. Chael on the other hand, is a born performer and allows the power and energy of their music to ricochet between them as they rap.

The stage is really just fun between friends, enjoying the vibe from their collaborative expertise with their explosive wordplay. Chael says when it comes to creating their music, “hooks are no man’s land, bridges can be no man’s land, but verses are everyman for himself.”

When asked a question during interview they would say, “I’m not gonna talk too long” quietly to the other, almost as if to show they believe in shining in the spotlight equally. The pair are very conscious and respectful of each other, reflecting their clear rapport which is emphasized in their performance. The vibrant sense of unity and individuality, all at once, crackles in the air around them, exciting your nerves and opening your ears.

Overtime the music became more personal, and Jeremiah became more passionate about his writing. As he took it more seriously, he found himself frustrated with his inaptitude in some areas. He invested a year and a half learning different vocabulary and expressive lingo, filling notebook after notebook with short verses as he focused on becoming the best in his craft.  Chael honing his writing with similar focus and critique.

“You just got to persevere, its a basic concept; just keep doing something until you can’t possibly do it anymore.” —-Jeremiah Woody

Jordon Peterson, psychology professor, ” The reason people listen to my lectures so much is not that I am not saying something that they don’t know already, it’s just the ability to articulate their soul, and that’s what artists do. When  people latch on to what you are saying it’s because you have understood how they feel, and couldn’t find a way to say; recognizing their reality.”

Both artists’ parents were not eager for their sons to be rappers, and as a result were often told the two were off performing spoken word; a field  they had only dabbled in, while excelling at rap. Chael also excelled in school, which lead to his family having different expectations for him than he held for himself. Chael has cycled through careers such as barber, to basketball player, to football player, to author, to architect and then writing and rapping. Chael still wants to be an author but that is down the road. After their journey through spoken word to improve their craft, Chael is now studying comedy. He is looking to become a master of all types of writing.

Jeremiah says,” message-wise what we do is a combination of introspection from two artists, reflecting into our personal lives and at the same time giving advice, in the sense of relatable struggles. We articulate this through the music.” The overall message: they are two young individuals that share some life experiences as everyone does, and can relate to most labels, and many age groups. “Thats the dope part about it,” chortles Chael.

Ex.ni has been brought the cheese, have you added them to your musical platter? Check them out at upcoming events such as “The Poets at USF”, Thursday nights at 7pm, and for special shows at “Basement Sessions” at Shuffle Tampa.